If I was choosing one restaurant in Inverness that people speak most highly about, it would have to be Rocpool on Ness Walk. It has gone from strength to strength since the Pieraccini’s opened it in 2002, had an owner change and has now cemented its status as one of the city’s finest. We went a little over a year ago & were served the best mussels in chorizo I’ve had so we were confident in our choice.

Eating early, we took advantage of the pre-theatre menu. 2 courses for £16.95 is more than I’m used to for a pre-theatre menu so they were setting the bar high from the start.

On entry were greeted by who I would say is probably the owner and were made to feel comfortable. He stopped for a chat then got the night kicked off with a Caorunn.

Not wanting to fill myself up, I chose the salad option for starter. The menu described it as ‘fresh pear and pecorino cheese salad with minted broad beans and lemon’. Mint in a salad used to scare me but Jamie Oliver has recently sorted that out, phew. The salad was well balanced with the right ratio of leaves to the creamy cheese, sweet pear and fresh broad beans. I could have eaten a whole plate of those broad beans.

Mr S tried the scrambled egg and crab on toast with cress and spring onion creme fraiche on a recommendation from his dad. He was very happy. It’s such a simple but great idea & they executed it pretty perfectly.

For main course I was between the seabream and steak tagliata but eventually chose steak because Mr S was having it and I thought I’d get jealous. The description of ‘Scotch rump steak ‘tagliata’ style carved pink over fresh rocket leaves, fine beans and butter roasted new potatoes with salsa rosso and lime’ definitely sounded worth the two pound supplement, we thought we were getting a bargain. The potatoes were delicious – well cooked, seasoned and flavoursome. The rocket could have done with lots of salsa rosso through it to add zing. The meat was too chewy for me and I left more than half of it. I was surprised that Mr S found it chewy because he likes tasty cuts of fibrous beef like hanger. The meat portion size was far too big for either of us and we’d have preferred more quality over quantity in this case. Not one to order again but I saw other tables with the seabream and haddock and it looked nice.

Since the main was a flop, I was having a dessert (like I need an excuse). We decided on the homemade honeycomb ice-cream with popcorn and hot chocolate sauce. Let’s just say that this was a star indulgent dish from Rocpool. It was like an elegant version of an American style sundae. I wanted to lick the glass.

I have to mention the toilets! Very plush looking sink area, clean toilets and they are unisex. Was very strange going into the toilet at the same time a man did, and doing my lipstick next to a gent washing his hands but I got used to it. 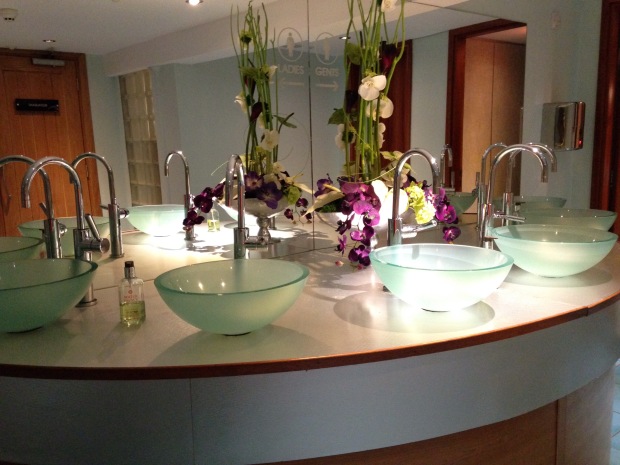 The service, wine, atmosphere, starters and dessert were all getting top marks so, although neither of us liked the main course, we still want to come back soon. We’ll maybe do one more pre-theatre before parting with our a la carte pounds but we’re sure we’ll be won over by it.