It’s been a busy time of late at Highland Foodie HQ so I haven’t had a chance to do a full post on our Christmas lunch at the Storehouse of Foulis. But I wanted to get it out before Christmas so that you can try it before it’s too late…. 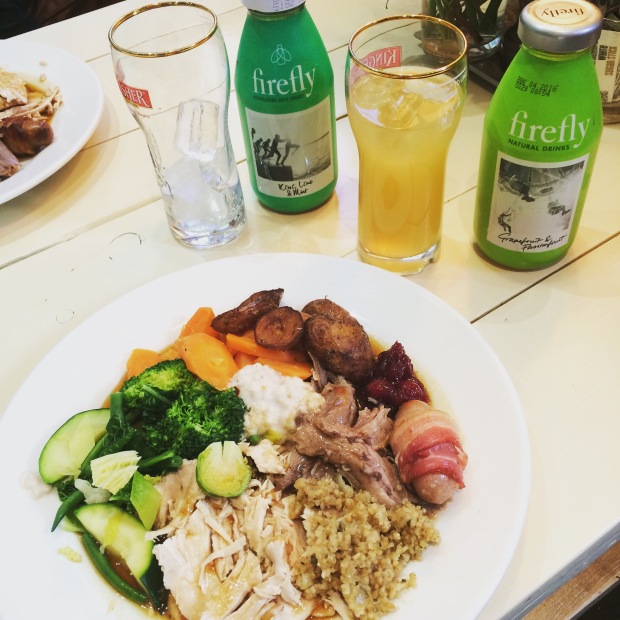 We wanted somewhere baby friendly for lunch on the outskirts of Inverness. The Storehouse appealed because they also have a premium food & booze shop on site so it felt like a little day out instead of just lunch.

It’s about 20 minutes in the car from Inverness following signs to Alness. You’ll see it on the right after the Cromarty Bridge.

We arrived on the dreicht Wednesday afternoon and the place was heaving. It has a large seating area but we still had to search for a table. Luckily there was a couch free, which turned out to be handy for feeding the babies and pram space.

It is self service and the queue was long but went down fairly quickly.
We both opted for the Christmas turkey lunch but were tempted by the homemade soups, beef stew, baked potatoes and salads.

The food was fantastic- much better than I was expecting and not like a self service meal at all. They gave us plenty of white and dark turkey meat, which wasn’t dry, alongside a pig in blanket and lovely stuffing. My favourite bread sauce was followed in the middle, surrounded by carrot, broccoli, green beans and courgette. I particularly liked the courgette and green beans because they still had a nice crunch and you don’t normally see them on a roast dinner plate. I might rethink my veg options this year. My only complaint is that there wasn’t quite enough potato for the amount of meat. Saying that, I just loaded up with veg instead. Finally, I have to mention the cranberry sauce because it was delicious. I’m not one for cranberry sauce after trying to many jellified versions that are lacking in flavour but this one tasted fresh and fruity and the cranberries were juicy with no jelly in sight.

I like a wee Firefly drink too so that earned them bonus points.

I finished with a rich chocolate mousse and a coffee, albeit two hours after we came in because we were chatting so much. The relaxed nature is a major plus for the informality of self serve – we loved our chilled out afternoon. It can get loud in there because it is such a large room so we felt at ease incase there was a baby meltdown (thankfully there wasn’t!).

Since we had two babies to contend with, I forgot to take more photos but I’ll do a full post next time I go back. Because I will definitely be back.